South Carolina law mandates that public colleges require students to complete a yearlong class on the U.S. Constitution, the Declaration of Independence, and the Federalist Papers.

It is alarming that most of South Carolina’s public colleges refuse to require a class on the U.S. Constitution in accordance with state law at this juncture in our country. Knowledge of American government and American history is at an all time low. One recent survey showed 60% of Americans cannot name the three branches of government. Another showed 37% cannot list a single right from the First Amendment. Yet while Americans cannot name the Bill of Rights’ protections of free speech or religion, one in ten Americans believe the Bill of Rights includes the right to own a pet.

When Benjamin Franklin left the Constitutional Convention in Philadelphia on that late summer day in 1787, one woman asked him, “what kind of government is the United States going to have?” Dr. Franklin famously replied, “a republic madam, if you can keep it.” Republics, by their nature, depend on a virtuous and educated citizenry because it is the citizens that rule themselves through their elected representatives.

On the other hand, South Carolina’s two largest colleges, the University of South Carolina and Clemson University, have fought against complying with the current state law manding colleges to require students to take a “one year” class on the U.S. Constitution.

Both UofSC and Clemson have said that requiring college students to take a class on the U.S. Constitution is too financially burdensome. They could, however, save funds if they did not waste funds to offer unimportant elective classes. For example, current elective classes UofSC offers include, “Tailgating 101,” “Viking Mythology,” and “History of the Devil.” Clemson, for its part, offers elective classes such as, “Turkey Hunting,” “Jazz Dance,” and “Sexuality and Cinema.” If UofSC and Clemson were genuinely concerned about the cost they could redirect existing funds to teach the U.S. Constitution—as required by state law—instead of wasting funds on unimportant courses. 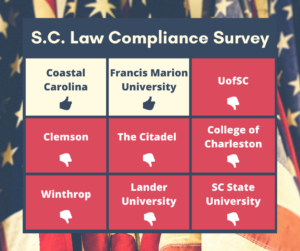 Nationally, legislatures in seven other states have passed laws mandating that public colleges require students complete a class on the U.S. Constitution: Texas, Nevada, Wyoming, Georgia, Utah, Arkansas, and Missouri. The length of the required Constitution class in these seven states varies, but all the public colleges require a three-credit hour class minimum. Of the eight states with laws requiring a college class on the U.S. Constitution, South Carolina is the only state where the public colleges choose to violate state law (with two exceptions, Coastal Carolina University and Francis Marion University). 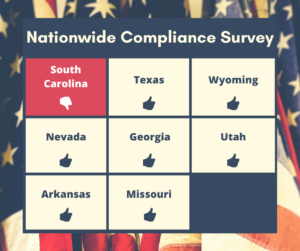 Ronald Reagan reminded Americans that freedom is not passed in the bloodstream, but rather must be consciously passed on to each generation:

Freedom is never more than one generation away from extinction. We didn’t pass it to our children in the bloodstream. The only way they can inherit the freedom we have known is if we fight for it, protect it, defend it, and then hand it to them with the well taught lessons of how they and their lifetime must do the same. And if you and I don’t do this, then you and I may well spend our sunset years telling our children, and our children’s children, what it was once like in America when men were free.

Knowledge of America’s founding principles that make America free is not something with which Americas are born, rather, it must be taught and learned. Consequently, it is critical that each generation has a firm understanding of the founding documents from which these principles emanate: the U.S. Constitution, the Declaration of Independence, and the Federalist Papers.

This is why South Carolina, and seven other states, have enacted laws that require colleges to teach students America’s founding documents. Colleges should teach these founding documents as part of their general mission of producing good citizens. But to the extent that public colleges do not do so on their own, eight states, including South Carolina, have required that they do so by law.

The public colleges in Texas, Nevada, Wyoming, Georgia, Utah, Arkansas, and Missouri all comply with their state laws and require college students to take a class America’s founding documents. South Carolina’s public colleges should stop violating, and instead, start complying with South Carolina law and teach students the U.S. Constitution, the Declaration of Independence, and the Federalist Papers.