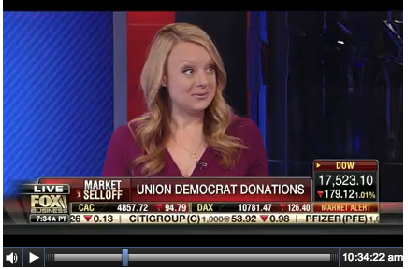 Today on “Varney and Co,” our Tony Blankley Fellow Jillian Melchior discussed her excellent piece on the realities of Unions and how they spend their members’ money.

An excerpt from her piece at National Review:

An exhaustive new study from the Center for Union Facts (CUF) crunched the numbers on union political spending, tracking down where members’ dues ended up. Nearly $140 million — about 99 percent of all union political contributions — went to Democrats and liberal causes, the study found.

“I believe what this illustrates is that union members have very little control over their own dues money, which is supposed to be for collective bargaining — but a whole lot of it is going to political causes and political advocacy,” says Richard Berman, executive director of CUF.